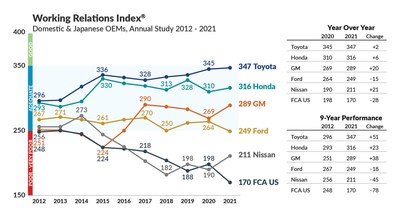 Typically, a crisis is not the time to improve established relations, but the OEMs' efforts to enhance mutual trust, transparency, and communications moved relationships forward through the worst of COVID-19 and the stop and restart of their operations.

The top three scorers again this year on the WRI® graph were Toyota at 347 and Honda at 316 who gained only two and six points respectively, and General Motors in third place. GM jumped 20 points to 289, further distancing itself from Ford in fourth place which dropped 15 points to 249. Nissan scored only 211 but gained 21 points – enough to retake fifth place from FCA/Stellantis which lost 28 points and is in a distant last place in the rankings at 170 (Fig. 1).

"Without a doubt, the industry went through a trial by fire this past year, but seeing the positive results for four of the six automakers was a surprise in many ways," said Dave Andrea, Principal in Plante Moran's Strategy and Automotive & Mobility Consulting Practice, which conducted the study. "Typically, a crisis is not the time to improve established relations, but the OEMs' efforts to enhance mutual trust, transparency, and communications moved relationships forward through the worst of COVID-19 and the stop and restart of their operations."

"The automakers will have to continue building on these fundamentals to survive near-term parts shortages like the scarcity of microchips, and truly deepen relations to support the development of electric vehicles and related technologies in-house or out-sourced, or through acquisitions or partnerships. These industry challenges put more pressure on purchasing organizations to respond and resolve issues more effectively."

The WRI® survey identifies specific supplier feedback on many attributes contributing to a purchasing organization's throughput effectiveness. Looking across these attributes (Table 1) Honda is rated the best in purchasing effectiveness overall, Toyota in second and the others following in the same order as the 2021 WRI® rankings.

Further, the table shows you don't have to be the biggest to have the best throughput as Honda shows with its top ranking in five of the seven variables measured. On the other hand, it suggests GM used its size and resources to improve its perception with suppliers, ranking first on buyer accessibility and, as the full Study shows, improving on all these variables except Effective Product Development Involvement, which slipped.

"We're often asked by automakers what's the key factor – the "silver bullet" – that will improve their Index ranking," said Andrea. "The answer is: there isn't one simple thing. It's making many small, incremental improvements to the foundational elements over time – such as paying invoices, and training knowlegeable buyers – and aligning top leadership and all functions to support value-add by the supply chain."

A nine-year comparison of the OEMs' performance supports this premise. Although Toyota only gained two points this year, its corporate mantra of "continuous improvement" has paid off with a 51-point gain since its low point in 2012, while GM improved by 38 points, and Honda, 23 points. But, over the same nine-year period, Ford dropped 18 points, Nissan was down 45 points, and FCA/Stellantis fell 78 points (see nine-year comparison, Fig.1).

The Study has shown the cornerstone of good working relations to be trust and communication, particularly important factors in the current uncertain business environment with billions of dollars and thousands of jobs at stake. Figure 2 shows how suppliers have ranked the six automakers in terms of trust over the past three years. The three-year average of Supplier Trust of OEM shows Toyota first with significant improvement; Honda and GM relatively steady at second and third; Ford down slightly at fourth; Nissan gaining and in fifth place and FCA/Stellantis dropping significantly this year to last place.

The level of perceived Trust and Communication of OEMs by suppliers when dealing with their customers is directly correlated to benefits the OEMs receive from them. In Fig. 3, note how the overlaid Supplier Benefits Index™ line closely tracks the bars for Trust and Communication. These two factors also play a major role in which OEM is the beneficiary of suppliers' willingness to invest in new technology in product development activities (Fig. 4). This year, GM took over first place from Toyota in supplier willingness to invest in technology, with Nissan is up significantly but still in last place.

"The buyers, while always on the front line, played an essential role to increase communication frequency, transparency and correctness. In the Buyers Characteristics Index™ (Fig. 5), GM jumped 15-points to first place. The BCI™ focuses on key attributes of the buyers' knowledge, communication, and overall working characteristics, such as integrity and trust. Suppliers rated GM's buyers higher year-over-year on every variable the BCI™ measures."

The rankings in the overall WRI® provide high-level insight, but the study also delves deeply into OEMs' specific purchasing areas. By examining each specific area, management can determine where improvements are needed.

As shown in Table 2, Toyota ranks best in seven of the eight specific purchasing areas with Honda best in Body-in-White. It is especially noteworthy that in the two most important areas going forward -- autonomous vehicles and EVs -- Toyota ranked highest in EV & Hybrid Powertrain and Electrical & Electronics.

For a number of years, automakers have been trying to speed time to market, lower cost, and improve quality by having departments involved in product design, development, engineering and purchasing work more closely and streamline decision making.

Two graphs show the results of these efforts. The OEM's engineering organization causing unnecessary costs is falling at five of the six OEMs with Toyota and Honda clearly doing the best job, but Ford is challenged in this area (Fig. 6).

Further, the study asks suppliers to rank the OEMs on the degree they feel they receive conflicting objectives between purchasing and engineering – which leads to higher costs (Fig. 7). This includes late or excessive engineering changes; whether the supplier is given enough flexibility to meet cost and quality objectives; and if the supplier is involved early enough in OEM product development -- and kept involved throughout the process. All of these are critical to reduce cost, improve quality, and speed time-to-market. Although still number one in this area, Toyota lost some ground and Honda improved in 2021.

"These are critical functions that must be properly aligned and working together for the OEMs to take cost and time out of the entire supply chain while helping suppliers achieve their cost and financial performance goals as well," said Andrea

"Focusing on improving supplier relations across purchasing, engineering and product development, is critical for the automakers right now and essential for competitive advantage in the future. Suppliers contribute 60-70 percent of the value of the vehicle, so it is clearly in the OEMs' best interest to have these teams working collaboratively with their suppliers."

For years, Toyota has led the industry in supplier relations. As Table 3 shows, Toyota was first in three of four indexes -- and continues to improve. Toyota is also the automaker that suppliers prefer to work with, and receives the benefits that go with preference.

The annual Study is conducted by Plante Moran and this year ran from mid-February to mid-April. Respondents represented 728 salespersons from 479 Tier-1 suppliers, representing about 50% of the six OEMs' annual buy. Demographically, the supplier-respondents represent 41 of the Top 50 NA suppliers and 64 of the Top 100 NA suppliers. The study is watched carefully by automakers because their supplier relations rating on the Working Relations Index® (WRI®) is highly correlated to the benefits that the OEM receives from its suppliers, including better pricing, more investment in innovation and technology, more sharing of technology, and better supplier support, all of which contribute to the OEM's operating profit and competitive strength.

Two decades of Working Relations and profit-per-vehicle data back this up and show that strong working relations reduce the cost to OEMs of doing business, help improve efficiency and productivity, and reduce time to market. 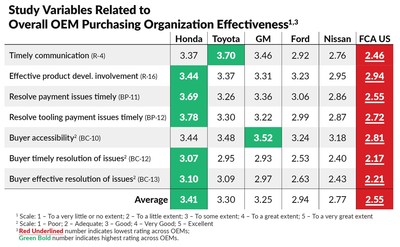 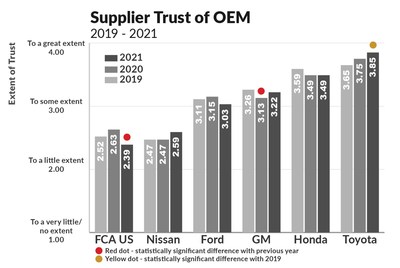 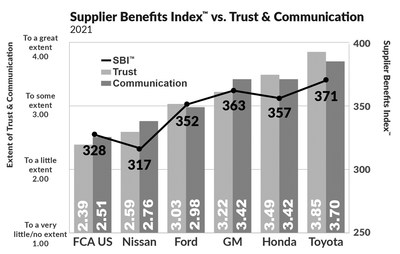 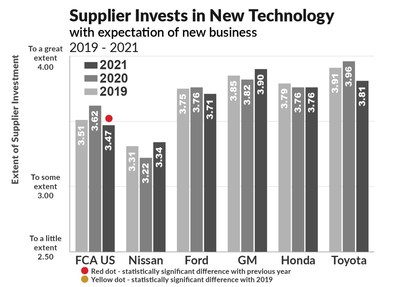 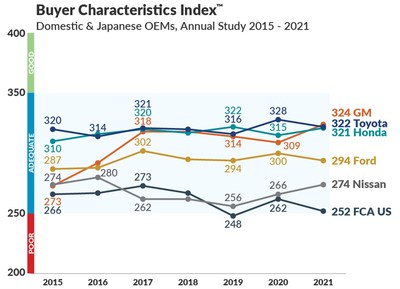 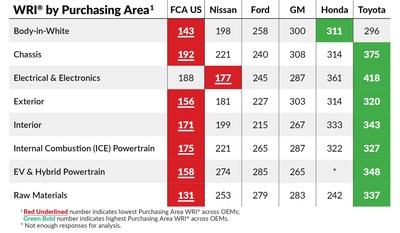 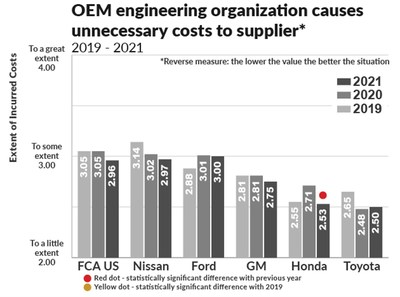 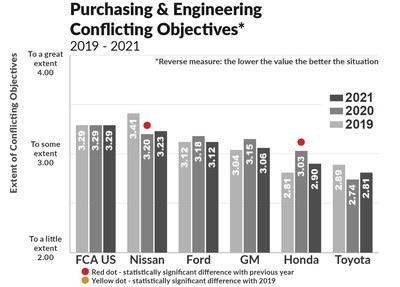 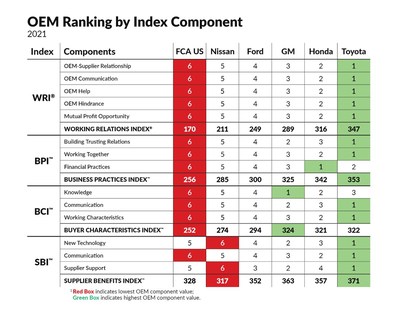